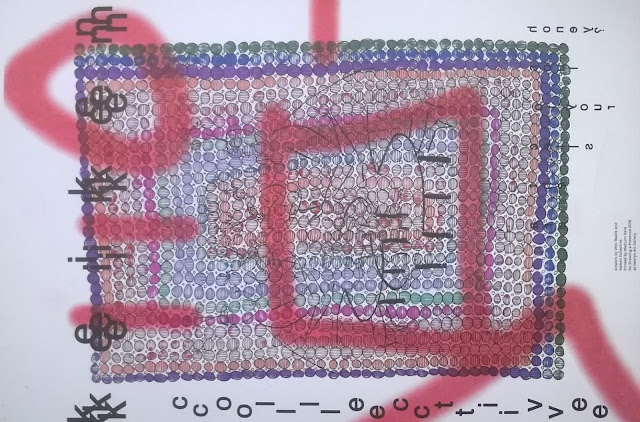 Above is the finished version of my latest drawing as I have said before a bleeding narrative obliterarty. I do get a certain amount of general satisfaction out of finishing a drawing to the rules I set out and then secondly I get another satisfaction from the way it looks although I will play with the aesthetics throughout the work on the drawing, I nearly always have that in mind.

Today I didn't have anyone turn up for my tour and draw, not unusual on a Saturday, it doesn't seem to that this might be the best day to have this event but I do get some sometimes and that is worth it to me.

This afternoon was spent at home and I did some research and some website work. 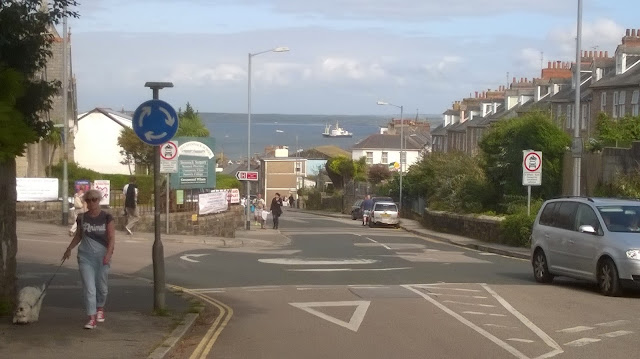 This evening we went down the hill for a couple of pints and well deserved they seemed and here is a view of the bay on the way down.

Part of my research today has been going through Trent Morse's book 'Ballpoint art'. Ball point pens are a drawing tool I hardly know so to speak. I have probably written millions of words with them especially in my formative years at school but I have no real memory of drawing with them although I must have done and doodled with them to and thinking back doodling was an activity I was doing quite a lot from being a kid to mid adulthood and somewhere in that time I began to form certain types of patterns and also get into the repetitive gestures that have become such a part of the work I do. If it is still doodling then it is fully formed and with a purpose and room to extend and explore in the way I perceive that art does.
Over the years taking on the title of artist was quite a land grab when I first thought I had enough front to say in front of a few people 'I am an artist' but after doing more work and taking part in exhibitions and being selected and having been in Galleries from time to time and just doing and exploring whatever it is I do I am now is that part of me is an artist and in someways so what, what does that mean anyway? Having said that if I was asked it is the first answer I would say if I was being honest or not sensitive. I have answered to many titles or definitions by job to what I did at the time, student, computer programmer, musician, cinema screen erector, removal man, teacher, artist and cafe proprietor and probably a few more a long the way.