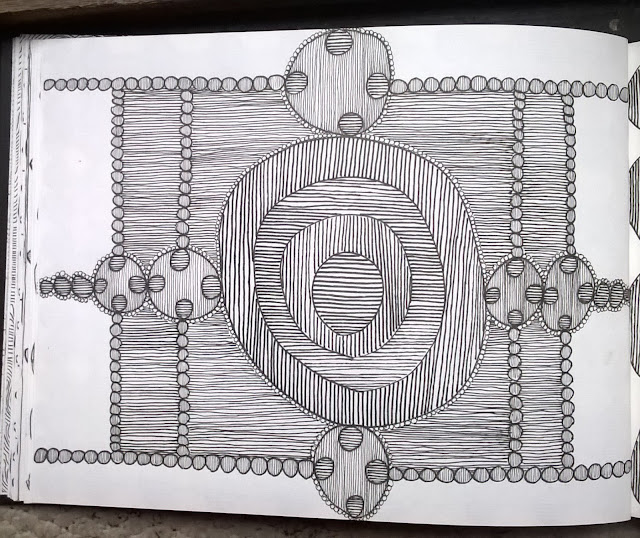 Above is the drawing I had a frame works for the day before that I finished off in last nights drawing session and another successful page done in this whole sketchbook work. I am less than a month in on this whole book project. It is going well so far although I am only about a quarter of the way into it. 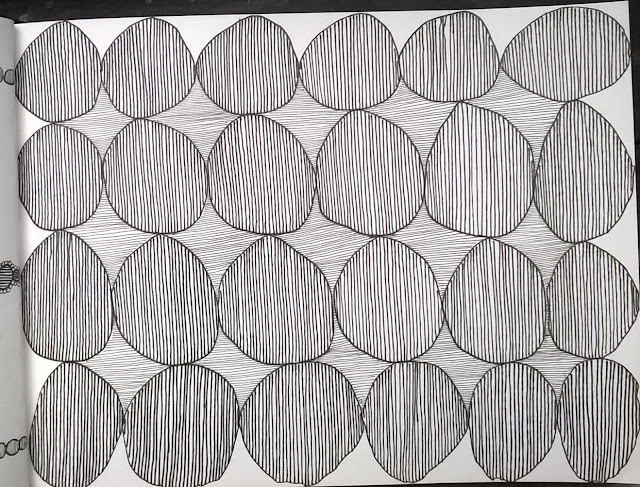 When the first drawing was complete I got the frame work of this one above started and got some of the detail done. I could get quite obsessed with this project and in some ways I would love to be able to put a few more hours in a day but it won't fit in with life and work. I do seem to get 3 or 4 hours in every evening. The reason I was able to finish this drawing before tonight is after running around a bit this morning and then getting some more posters out and distributing some leaflets getting ready for half term. At the end of that we went for a coffee in The Rum & Crab Shack to collect our thoughts and I also managed to finish this drawing above off.

So tonight I start on a whole new one. I will probably flick through the previous 30 odd and I will then choose a pen and off I will go. I don't seem to get at all worried about having a blank page in front of me as I have so many ideas at the moment that I want to explore.

Today I also have painted, well decorated some doors and also I saw most of the FA Cup final between Arsenal and Chelsea. I recently read somewhere that Arsenal are Jeremy Corbyn's team and they play in red against the blue of Chelsea. I took that as an omen for the result of the general election and low and behold Arsenal won 2 - 1. Personally I am not a great fan of either team but my wife's daughter is a big Arsenal fan and I took a dislike to Chelsea when the beat Leeds in the 1971 or was it 1972 FA Cup final replay when Chelsea won late on with some fairly rough tactics and in my opinion as a young football fan, unfairly. So today I am pleased that red beat blue in an entertaining game and after the political events and other sad events of this week I do hope it is a portent to a Labour victory on 8th June. I fear for our country and it's values if this doesn't happen and after a rather massive groundswell of public opinion that the unfair media bias might cost all of us who live in the U.K. very dearly indeed.

I live in hope and will keep drawing whatever.