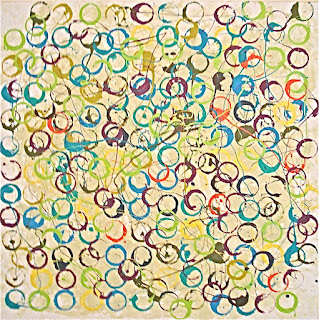 Above and below are two examples of my process paintings, these were done with household paint tester pots using the lids as a printing device. I loved every minute spent doing these and might do more in the future and the series proved quite successful in terms of sales and admirers which doesn't always happen. 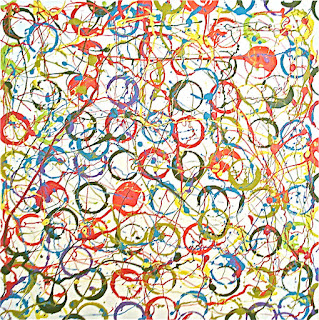 Below is another abstract painting I did in 2002/03, it was one of the first works I did on MDF. I was pretty happy with the result but at the time I had difficulty seeing how it would become a satisfying series for me so it remains a one off. 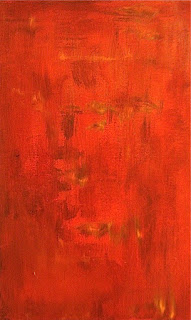 I was invited to pop into The Gallery by Paul Vibert, opposite the Guildhall today to see some of Andrew Litten's work with the possibility of meeting him because he was dropping off some new works, Paul thought I would enjoy the experience and see lots of work that would interest me. We had a good talk about a number of artists and also about a painting that had been done for his son Luke's new album. I also saw some works by Ian Dunlop who had been in The Flying Burrito Brothers with Gram Parsons.
A short time later bumped into Leo Walker and had a quick chat about maybe putting some art into a house. Previously we have had conversation about getting 'real' art into hotels and rental properties in and around St Ives. I have always been amazed by the rubbish some organisations will put in a hotel room to decorate it. Let us have some standards and get real art to show off our taste as a nation and also so some 'starving' artists get a little bit more income and places would be interesting.