A New Work and Milton Keynes. 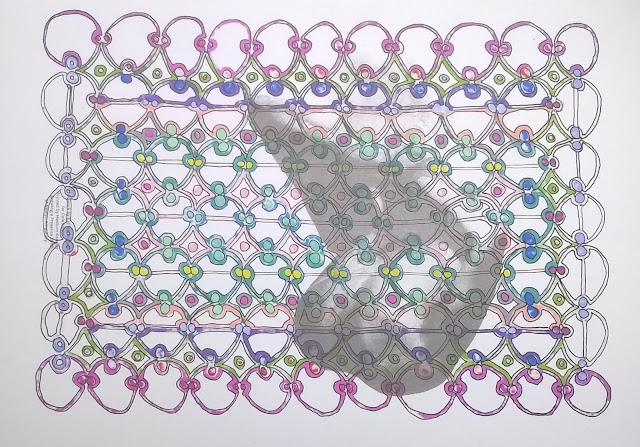 Above is the 'bleeding narrative' of a previous drawing from my very recent mini series, I am happy as ever with the way it looks and it kept me busy in last evenings session.
Whilst I started drawing on this we had the television on and it was a program about 50 years of Milton Keynes the town I lived in and around from my teenage years, it did make me feel a bit nostalgic about that time of the new city gathering and growing. It dealt quite a lot about how do you gain a culture in a new city but I always thought that there was some culture or we all helped that culture whether being creative or just going to stuff. I saw MK's music culture grow first with a boom in Punk and New Wave bands and the forging of a scene of sorts, I still know many of those people from that time although I now live 300 miles away and indeed my friend and great organiser Lee Scriven was involved in the making of the program. He made a film that has had a limited release called 'I Must Adjust' which was a great piece on moving from London to be part of a new city and was named after one of his punk band's songs. Ficticious were the first serious band I supported in my small town punk outfit More Trivia. Over the years Lee was responsible for many small leaps, my first music on vinyl 7", 12" and first album all in the band New Mutants, later I joined his big band The Blues Collective and toured collages and many other venues and ending up on CD for the first time. Lee has always been an inspirational creative in Milton Keynes and it seems he hasn't finished yet.

Anyway less nostalgia except to say also the town of my first group exhibitions and my first solo show. I am now thinking about my next show and who knows where that will be at the moment but I have been working hard as ever on new stuff for whenever I get the chance to do a new show and have plenty of stuff for the right gallery or galleries but I need time to make some approaches and sadly the summer time in St Ives is not quite the right time to be doing that, what with busy workshops and drawing tours and helping in my friends shop from time to time and evenings spent drawing and trying to relax and think up new stuff for Barnoon and my drawing works. Well I am off to do that, cheers all...
Posted by Unknown at 20:36