My take on Contemporary Abstract Drawing and other stuff.

Saturday: I have this phrase stuck in my head about what I do. Contemporary Abstract Drawing is what I think is a convenient phrase for what I do if I break the term drawing down to one of it's 'sub genres' like you would do if you were describing a piece of electronic music. For instance in the beginning of modern dance music you had House closely followed by Techno after that it split into many different sub genres. I am not claiming to be at the beginning of something or claiming much really about anything with the exception I feel my work possibly comes under contemporary abstract drawing, I feel I am hitting on all the three words in the phrase but really it is out there for other people and the owners of my work to think what they think.

Anyway that is what has been going on in my head whilst I have been working on these new drawings over the last 24 hours. 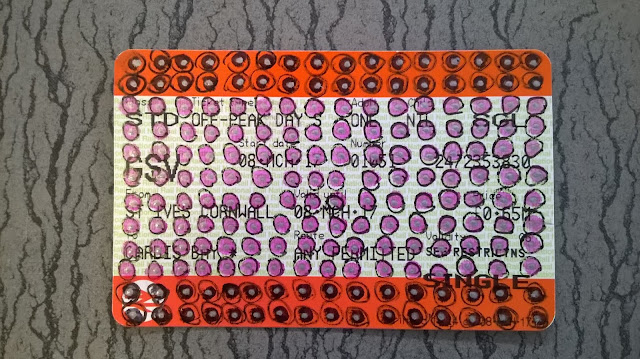 Above is a small drawing done on a train ticket that was for a quick journey up to Carbis Bay last Wednesday. They layout of the ticket is a much seen and ignored design but it caught my eye and so I had to draw on it. It seems to follow on from my obliterarty drawings but because it was my ticket it encapsulates a little biographical moment or is that just 'art bollocks' as Grayson Perry might say. I can't judge this statement either but what I do know is that I like the way it looks now and also that it was sitting on a Richard Long book kind of frames it nicely. 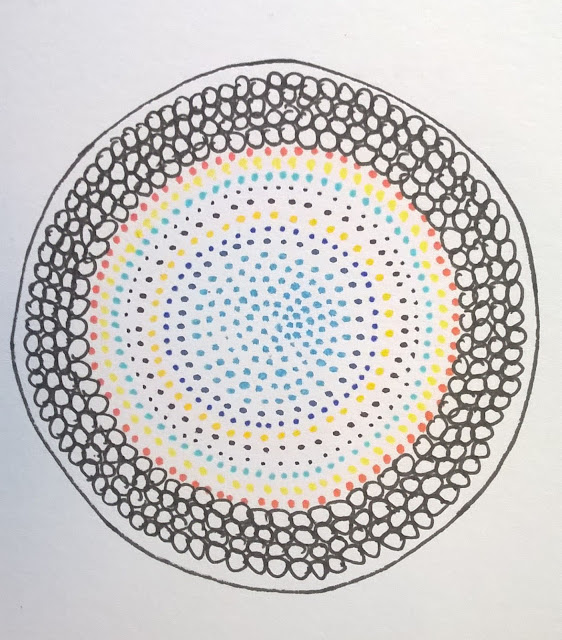 Above is a drawing I started when I ran my Abstract Drawing class last Wednesday and I think it might be finished now I have added a few more circles or hollow dots as I sometimes describe them in my head. They are quite a recent theme and I seem also to be working with them a lot to see what they do, so you will find more on the drawings below. 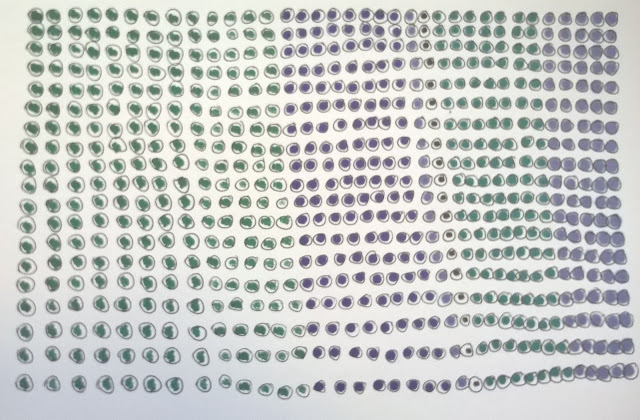 Above is another drawing I started in that same session and have added to, I am pretty sure this is still a work in progress but I am showing it as just that. I feel it is part of the narrative of my work and what I show in this blog, not only finished work but things that I haven't quite thought out yet. 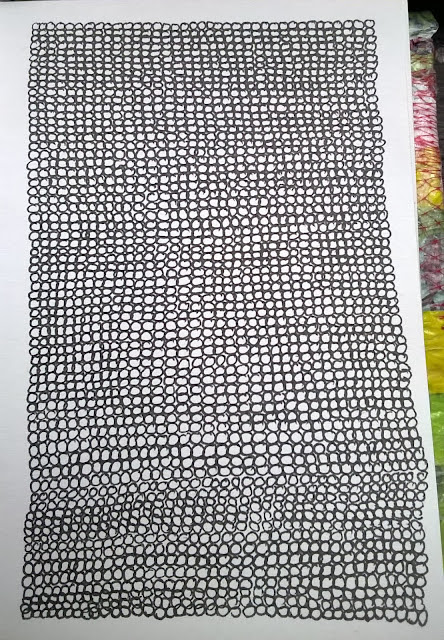 Here above is another drawing in my still untitled hand made book. This is the drawing that starts the second half of the book and features a whole load of those hollow dots I was talking about earlier.
I feel almost like counting them and might even do that later but is you are a 'counter' feel free to let me know. 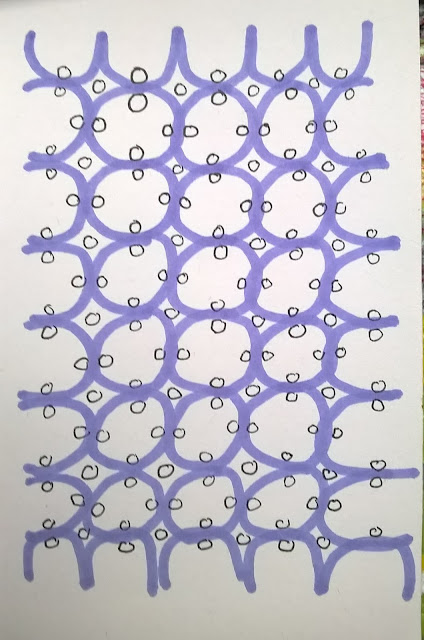 Above continuing on the circle/hollow dots thing slightly more deconstructed and freer. 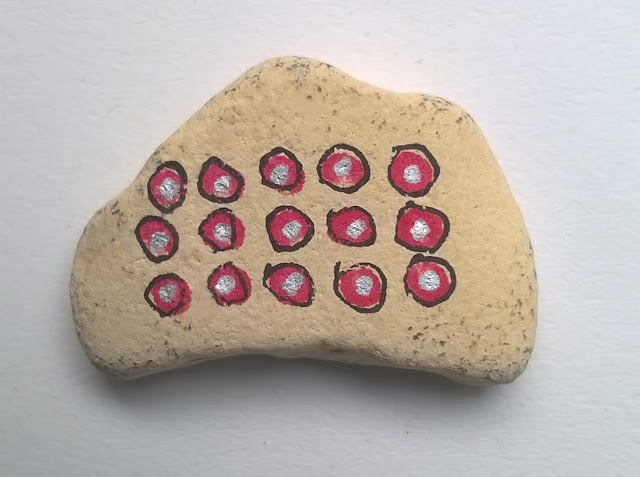 Above is another small drawing done on a piece of sea pottery that will probably be used for an art drop in the future although I am having some ideas about presenting groups of them as a bigger piece of work or works. For several years now I have been thinking of another type of work with them but in my head that needs full documentation including filming: 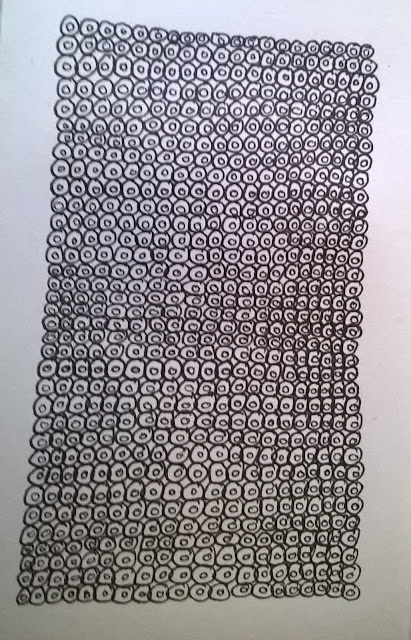 Above is the last drawing and most recently finished, double hollow dots.

Other things I have done today:

After breakfast I went up to Barnoon Workshop, we had a workshop advertised but no takers so I thought I would pop up there just in case anyone 'dropped in'. I spent a little time pottering about and then returned home. Suzanna my mother in law was getting ready for her return journey to Oxford later.

We then trotted down town and went to see Sam Bassett's exhibition at Anima-Mundi ' The Great Squall'. Zoe and I had already attended the private view but it was such a busy buzzy event that you couldn't take time to look at it all properly. It was good to go and see it when we had it almost too ourselves. I spent as much time looking at the work as I did watching the video of Sam's talk about what he is doing and what is going on and I found it all very interesting and may well pop back for a few further viewings. I think it is a really good exhibition and hopefully this show will get good press and launch him further into the world.

After the exhibition we went off to The Rum & Crab Shack to have a coffee before we went to the railway station to see Suzanna off on her journey home. 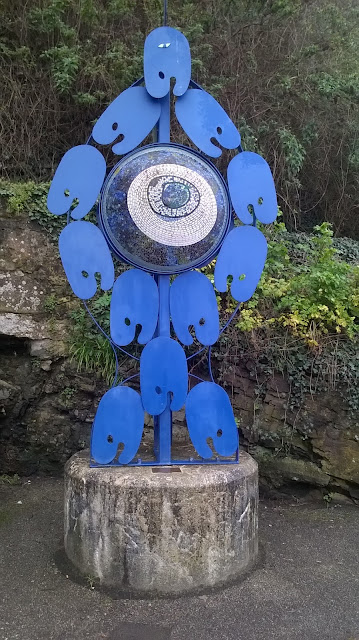 At the railway station there is this bit of public art that has never really connected with me much but hey at least it is there. I do think sometimes what would I do if I was asked to do a piece of public art and believe you me I do have a few half baked ideas and some more slightly fully formed ideas for some interventions. St Ives does need some more bohemian moments than it actually has, even if temporary ones.

Well I am as ever off to do some more drawing, watch a bit of television and relax it is Saturday after all and we have the house to ourselves again.